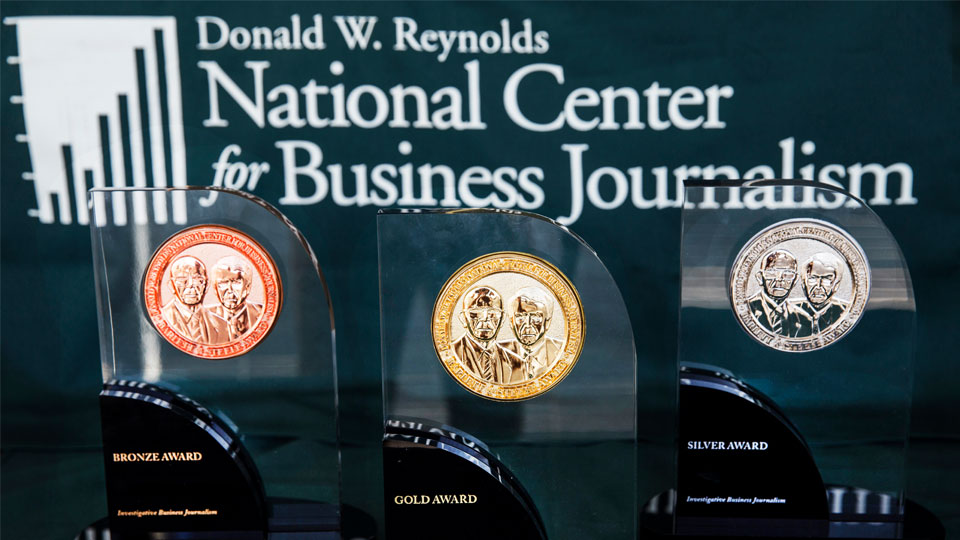 A podcast series on shocking abuse at Utah’s homes for troubled teens produced by a multiple-media team of journalists, and the Minnesota Star Tribune’s revelations of court-aided exploitation of accident victims, have taken top honors in the 16th Annual Barlett and Steele Awards for the Best in Investigative Business Journalism.

The inaugural award for Outstanding Young Journalist was claimed by Neil Bedi of ProPublica for an investigation into faulty mechanical heart pumps.

In addition to the first-ever Young Journalist award, this year marks the first time the Barlett and Steele Awards have recognized publications across two categories, Global/National and Regional/Local, to honor more of the outstanding business journalism being produced throughout the U.S. Each category features a Gold, Silver, and Bronze award. These awards come with cash prizes of US$3,000, US$2,000, and US$1,000 respectively. The Young Journalist award features a cash prize of US$3,000.

The Gold award in the Global/National category was won by a collaboration among American Public Media, Salt Lake Tribune, and KUER public radio, for their tenacious investigative work into the Utah government’s lackluster oversight of facilities housing troubled teenagers, resulting in widespread abuse. Their work resulted in a seven-part podcast series titled “Sent Away.”

Rounding out the Global/National category, the Silver award went to The Wall Street Journal for its investigation into federal judges’ hidden conflicts of interest. The Bronze was awarded to a team of reporters from Bloomberg for their revelations about questionable practices at a telemedicine startup.

In the Regional/Local category, the StarTribune won the Gold award for documenting how accident victims in several states were convinced to transfer their court-ordered compensation to other parties for a fraction of its value. In one case, StarTribune said, a mentally impaired car accident victim sold more than half a million dollars in future payments for $12,001.

The Silver award in the Regional/Local category went to a duo from the Atlanta Journal-Constitution for a series on dangerous dwellings, while a team of reporters from The Palm Beach Post and ProPublica won the Bronze award for documenting harmful pollution by the sugar industry.

The Barlett & Steele Awards are administered by the Donald W. Reynolds National Center for Business Journalism at Arizona State University’s Walter Cronkite School of Journalism and Mass Communication. The awards are named for the illustrious investigative business journalist team of Don Barlett & Jim Steele, who have worked together for more than four decades, receiving two Pulitzer Prizes, two National Magazine awards, and a long list of other journalism awards.

“This year’s winners are in the finest tradition of what these awards have come to represent — great reporting, fine writing and expert data analysis,” Steele said. “The winners are a testament to the value of in-depth reporting and how it benefits the public.”

Reynolds Center Director Dr. Jeffrey Timmermans said: “This addition of more awards this year has allowed us to recognize more ground-breaking investigative business journalism in the U.S. While the industry continues to face many challenges, the fact that there is so much outstanding work being done at news organizations throughout the country – from Utah to Florida – is cause for optimism.”

In their seven-part podcast series “Sent Away,” reporters from American Public Media, Salt Lake Tribune, and KUER public radio teamed up to expose the limitations of government oversight within the troubled-teen treatment industry. In the last six years, 20,000 kids from all over the country have been sent to more than 100 privately run treatment programs in Utah. This investigation found that the state took a hands-off approach to regulating these facilities, which enabled rampant abuse.

During the investigation, reporters hit a wall: Utah asked for thousands of dollars in fees to turn over inspection and investigation reports. Journalists turned to crowd-funding to cover the cost. The state eventually turned over 10,000 pages of records that showed reports of alleged sexual abuse, exploitation, and other atrocities. Even the death of a resident didn’t spur the government to step in or implement more rigid regulations, reporters found.

As a direct result of their reporting, the Utah government has taken a stronger approach to enforcing regulations, including revoking the license of one program named in the podcast. Additionally, the state is creating an online database to allow free public access to inspection reports — the same documents the reporters had to pay for.

As noted by the judges, this is “an extraordinary piece of investigative reporting that demonstrates the power of podcast journalism at its best.”

The Wall Street Journal investigation “Hidden Interests” examines how more than 130 federal judges broke a 1974 law. The law requires federal judges to recuse or excuse themselves from a case involving parties in which they or their family members have legal or equitable interest. WSJ examined 700 judges who held stocks with large companies and tens of thousands of cases from 2010 to 2018 and found 129 federal district judges and two other federal plaintiff judges to be in violation of the law.

Their investigation found that oftentimes, the judges were ruling in favor of their financial and familial ties. Sixty-one of the total judges accused were found to be trading the stocks while they were on the affiliated case.

There aren’t any laws or rules that ban judges from owning stocks, they just must recuse the cases when they are presented with them. These violations are not often seen by the public and judges’ financial information is only available upon request.

This WSJ investigation dives into the specific cases judges accepted and how their intentions may or may not have been financially motivated.

“Questionable Practices” brings the first important revelations about the largest medical mental-health startup, Cerebral, and its effort to bring telemedicine techniques to mental healthcare. With the demand for mental health services increasing, companies are finding ways to provide patients with quick solutions to their problems. Cerebral was one of the companies to start prescribing controlled substances online during relaxed rules that came out of the pandemic.

Bloomberg reporters found a lack of delicate consideration assessment from the million-dollar business when prescribing medication to their patients. Their piece dives into how Cerebral continued to use strong marketing techniques to bring in patients, despite the number of clients who have been negatively impacted by their practices.

Star Tribune reporters Jeff Meitrodt and Nicole Norfleet exposed the inhumane practices performed on car accident victims in their series “Unsettled: Cashing in on Accident Victims.” The investigation found that companies pay to take people’s future settlement checks worth hundreds of thousands of dollars for immediate and much smaller payments.

The reporting duo searched through thousands of pages of court documents to examine deals implemented from 2000 to 2020. They found a trend in places such as Minnesota that show how much money victims receive versus what the agreement was and the types of victims that suffer from yet another catastrophe. This investigative piece highlights not only the insurance companies’ involvement but also the effects on mental health.

“The ‘Unsettled’ series is an exemplary work of reporting and does a superb job in shedding a light into the little-known settlements purchasing industry,” said the judges. “The findings are astonishing and the thoroughness of the reporting – examining from the lens of all those involved from the victims, to the judges and the companies – is impressive.”

“Dangerous Dwellings,” a year-long Atlanta Journal-Constitution investigation, examines the squalid living conditions in some of the city’s worst apartments. The reporters found that the housing shortage and government inaction enabled absentee landlords to squeeze the properties for higher profits while putting tenants’ safety in peril.

Through a three-part series with character-driven stories, extensive data analysis, damning photos, and investigating more than 1,000 apartment complexes across five counties, the AJC’s story found that much of the region’s affordable housing is nearly uninhabitable. In many cases, landlords didn’t provide the bare minimum: functional plumbing, security cameras, gates that properly lock and close. Not only are those properties barely habitable — but the public is footing the bill for landlords’ tax breaks while their tenants perish.

“Dangerous Dwellings underscores how these dangerous conditions are part and parcel of a lucrative business model, smartly juxtaposing the living conditions of tenants and owners,” said the judges. “It’s spherical reporting that doesn’t simply describe a problem but goes deeper into finding out who’s to blame and why.

In response to the AJC’s investigation, Georgia district attorneys announced they intended to start cracking down on negligent apartment complex landlords.

The joint investigation between The Palm Beach Post and ProPublica follows Thelma Freedman and her two grandsons who were hospitalized in 2019 for upper respiratory infections. They live in the Glades, an area in Florida that is home to growing half of the country’s cane sugar. Each year, growers will burn their fields as a harvesting technique that covers the town in ash which the locals have named “Black Snow.”

State officials have found the sugar industry in violation of the Clean Air Act of 1970. But the investigation found that residents were exposed to pollutants in ways that monitoring systems had missed. Spending a year speaking with various community members, the reporters were able to see how the smoke was affecting them.

Additionally, the reporters used a unique investigative tool, automated text messages, to communicate with the community and gather information in real-time. They found that the community was staying indoors to avoid the harmful effects of the smoke and that it was only affecting communities of color and those in poverty.

This in-depth investigation is driven by human stories backed with actual data that shows how the sugar industry and state organizations have not properly addressed the pollution residents in lower-income areas of Florida are experiencing.

In his reporting, Neil Bedi of ProPublica went beyond identifying the harm caused by malfunctioning HeartWare devices. Through investigative analysis, Bedi identified the countless missteps taken by the FDA that showed that the government long knew of the problems that patients were never informed of.

This investigation revealed how easily companies can slip through major systemic gaps in the government systems that are intended to protect the most vulnerable. Bedi rigourously worked to connect with people who were harmed by the devices to continue telling their stories even after the initial story was published. Bedi’s reporting prompted Congress to investigate the FDA’s regulation of the HeartWare device and pushed the manufacturer, Medtronic, to expand financial assistance to consumers.

“Neil Bedi’s investigative analysis of the missteps in the FDA’s work with HeartWare are nicely juxtaposed with real testimonials,” said the judges. “You can tell Bedi went to great lengths to research and report this story.”

The Reynolds Center will spotlight the recipients of the top prizes at an event on Nov. 9 at 6 p.m. Arizona time in the First Amendment Forum at the Cronkite School in Downtown Phoenix. Tune in to the Reynolds Center event page for updates on the live event.