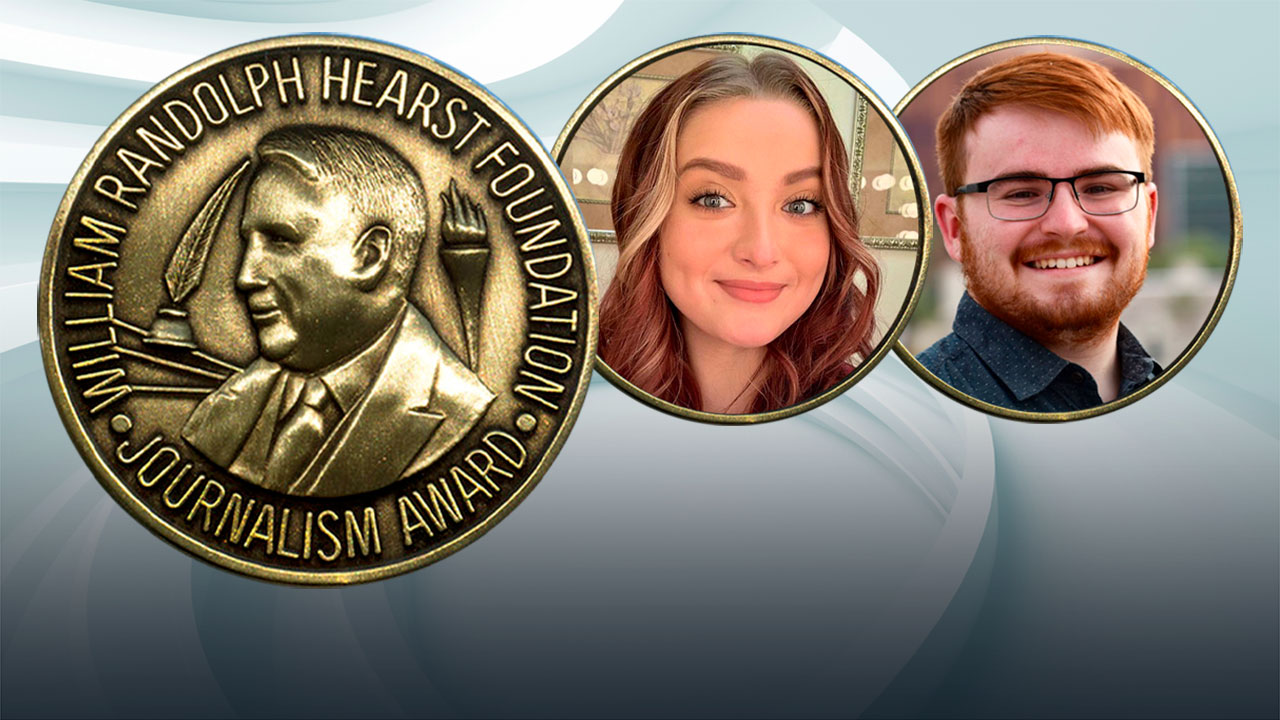 Cronkite student Mikenzie Hammel and Cronkite alum Christopher Howley each placed among the top winners in the Explanatory Reporting Competition of the 2021-2022 Hearst Journalism Awards Program. Their work was selected out of 117 entries from 67 universities nationwide.

Howley, who placed fourth, was a senior when he wrote his winning piece, “Diversifying the pack: Cross fostering helps Mexican wolf population boost genetic mix.” His award includes a $1,000 scholarship with a matching grant for Arizona State University.

“She mentioned the story about endangered Mexican wolves, and how there’s this huge effort going into increasing the population. I was all in on it,” he said.

Howley worked on the story for months alongside broadcast reporter Dylan McKim and photojournalist Michael Hannan, former Cronkite News journalists. The three traveled to Alpine, Arizona and the Endangered Wolf Center in Missouri to witness the conservation efforts firsthand.

“There were only a little over one hundred (wolves) left,” Howley said. “Going up there and speaking to all of the scientists who put their life’s work into trying to save the species was really interesting.”

Post-graduation, Howley went on to work as a general assignment reporter for the Corpus-Christi Caller Times in Texas. He recently returned to Arizona to work as a digital producer for the Arizona Republic.

“I grew up on the West Coast and I never want to leave there again,” he said. “I want to stay in journalism, having an impact on local communities so people can be more knowledgeable about what’s going on around them.”

Hammel, a third-year student, placed 10th for her piece “Advocates spotlight an overlooked cause of maternal mortality: mental health.”

As a reporter for Cronkite’s Southwest Health Reporting Initiative, Hammel had previously written about maternal mortality and wanted to expand on the topic.

“I really wanted to dive deeper … not just that it was happening and that women of color are disproportionately affected by it,” she said. “But what sort of factors play into it on a deeper level.”

Neither Howley nor Hammel knew their directors had submitted their pieces to the Hearst Competition.

“I was like ‘Oh my God,’ I couldn’t believe my eyes,” said Hammel upon receiving the email that she had won.

She said the award gave her a sense of validation and encouraged her to continue pursuing journalism.

“I didn’t even fathom how many people were actually reading my stories until that point,” she said. “I think it really was a turning point in how I view myself as a journalist.”

Hammel is the editor-in-chief for the Downtown Devil and expects to graduate in 2023 with a bachelor’s degree in journalism and a master’s in mass communication. Her goal is to work in Phoenix as a broadcast reporter.