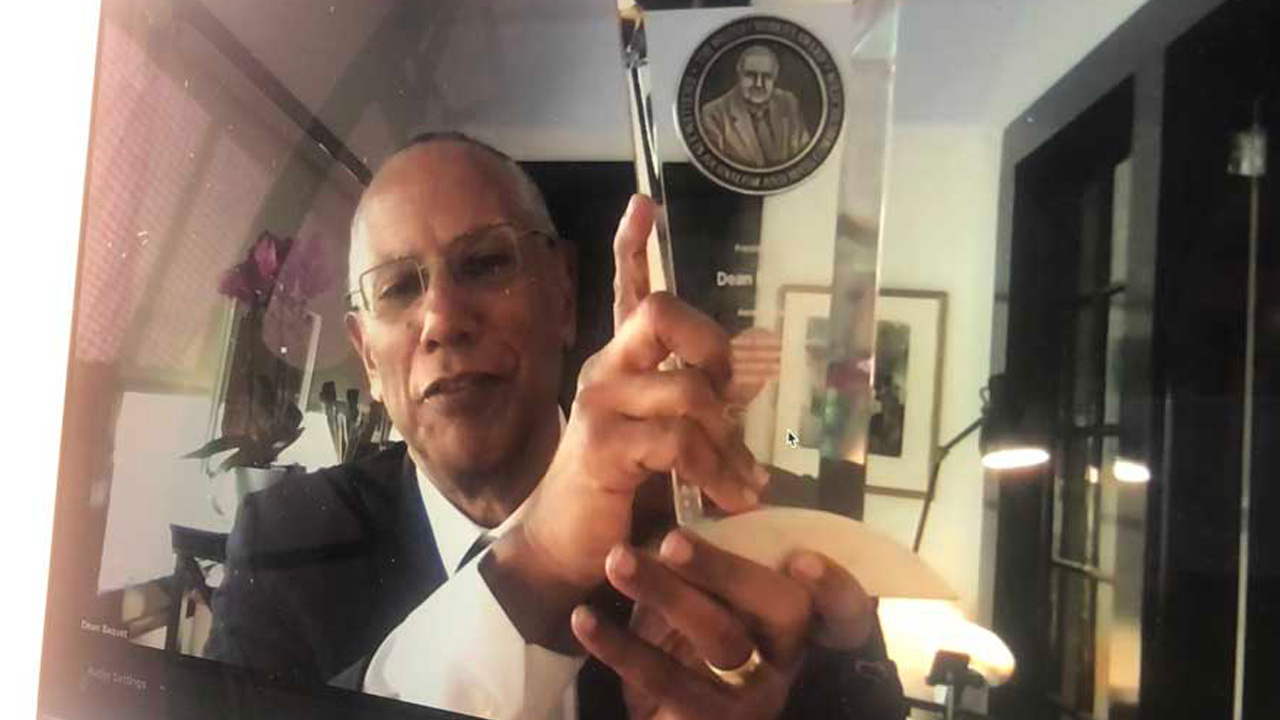 Dean Baquet, a Pulitzer Prize-winning journalist who is the first Black executive editor to lead both The New York Times and the Los Angeles Times, emphasized the importance of deep and open-minded reporting as he accepted the 2020 Walter Cronkite Award for Excellence in Journalism from Arizona State University today.

The ceremony included a video tribute created by Isaac Easley, a Cronkite graduate who is now an instructor at the school. The video features a number of Baquet’s current and former colleagues and peers who described his powerful impact on journalism and on their own careers.

One of the profession’s biggest crises is the “erosion of the primacy of reporting,” Baquet said in his acceptance speech. “There is not enough talk about the beauty of open-minded and empathetic reporting and the fear that its value will fade in an era where hot takes, quick analysis and riffs are held in such high esteem.”

To prepare his speech, Baquet said he interviewed journalists at his own publication and several others to discover how they approach reporting and how reporting has changed them. Several spoke to him about how they learned to set aside their own conclusions and assumptions in order to get to the truth of a story.

“Great journalism is skeptical of absolute certainty,” Baquet said. “These reporters did not see themselves as cheerleaders for anyone and even the best ideas are worthy of interrogation.

“A great reporter is always open to being proven wrong,” he continued. “At its best, journalism is the process we have built to come as close to the truth as humanly possible. We should be open to the challenges of that process. We should be humbled by its limitations. We should learn that each generation will want to question it.”

Baquet said some of the most profound moments of his career have occurred with a notebook in his hand.

“My life in journalism has been a full one,” he said. “For the students in the audience, I promise you, if you choose this life you will have much more fun than anyone ever should.”

“Mr. Baquet’s message about the importance of reporting – and reporting with empathy and an open mind – is particularly appropriate,” said Cronkite Interim Dean Kristin Gilger. “During his many visits to the school, Walter Cronkite often spoke about his own roots as a reporter and how important it is for journalists to check their assumptions at the door. Mr. Baquet’s words resonate today, just as Mr. Cronkite’s did then.”

Prior to the main ceremony, Baquet participated in a question-and-answer session with Cronkite supporters moderated by Jamie Landers, a Cronkite senior, and Vanessa Ruiz, Cronkite director for diversity initiatives and community engagement.

During that session, Baquet said he considers COVID-19 to be the biggest story of his career because it “touched every life in the world to some degree,” revealed inequities in America and “illustrated how government profoundly messed up.”

“American journalism acquitted itself well,” he said of coverage of the pandemic. “We set up our own system to track COVID illnesses. We created our own Center for Disease Control because the government wasn’t doing it.”

In response to a question about how much former President Donald Trump damaged the journalism profession, he said the former president’s frequent references to fake news and journalists as enemies of the people caused significant harm.

“He was not saying don’t trust the press. He was saying the press is trying to destroy the country.”

Under Baquet’s leadership, The Times has won 16 Pulitzer Prizes, including the 2018 Public Service award for exposing powerful and wealthy sexual predators, including Hollywood film producer Harvey Weinstein and other celebrities, which helped spark the rise of the #MeToo movement.