Home / About the Cronkite School / Cronkite Faculty and Leadership / Leadership

Kristin Gilger is the interim dean and Reynolds Professor in Business Journalism at the Cronkite School. She leads a team of more than 330 faculty and staff and more than 2,500 students across 10 degree programs. As interim dean, she also has responsibility for Arizona PBS.  In addition, she serves as executive director of two centers at the Cronkite School – the Donald W. Reynolds National Center for Business Journalism and the National Center on Disability and Journalism. Gilger is co-author of the well-regarded book on women leaders in the news media, “There’s No Crying In Newsrooms: What Women Have Learned About What It Takes to Lead.” She served in assistant dean and associate dean roles for 15 years at Cronkite before being named interim dean in June 2020. Before coming to ASU, Gilger served as deputy managing editor for news at The Arizona Republic, managing editor of the Statesman Journal in Salem, Oregon, and in several editing roles at The Times-Picayune newspaper in New Orleans. She holds bachelor’s and master’s degrees in journalism from the University of Nebraska. kristin.gilger@asu.edu

Melanie Asp Alvarez is a longtime broadcast news manager and educator now serving as an Assistant Dean at the Walter Cronkite School of Journalism and Mass Communication. Her focus is on the first-year Cronkite experience, with leadership in undergraduate orientation, events and student success. She also chairs the Cronkite Academic Standards Committee.

Previously, Melanie created and instructed a special topics course dedicated to training the next generation of broadcast news producers at the Cronkite School. She served as Executive Producer of Cronkite News (formerly NewsWatch) for a decade, which was consistently named the best collegiate newscast in the nation by the Broadcast Education Association and the Society of Professional Journalists. Prior to joining Cronkite, Melanie worked as a producer and executive producer for broadcast news, special projects and documentaries at stations in Los Angeles, Colorado, Florida and Arizona. Melanie.Alvarez@asu.edu

A two-time Fulbright Scholar, Bill Silcock researches global television news cultures, most recently in the Balkans. He joined the faculty in 2001 after a career as a TV news director, producer and anchor/reporter. He has won national awards for his documentaries “Backstage at a Presidential Debate: The Press, the Pundits and The People,” “Fortress of Faith” and “Woodstock: Back to the Garden.” Silcock’s research examines newsroom culture, particularly news values. Silcock has led the school’s European study abroad program. He has also conducted media training for international broadcast journalists through the U.S. State Department. He is uniquely positioned to direct the Cronkite School’s Global Initiatives and Humphrey Fellowship Program, one of only two journalism Humphrey programs in the world. b.silcock@asu.edu

Liz Bernreuter is responsible for securing significant philanthropic investments from individuals, foundations and corporate partners in support of the school’s priority programs and activities. Liz came to the Cronkite School from the ASU Foundation, where she served as associate director of corporate and foundation grants. She has also worked for a variety of arts and culture organizations including the Phoenix Symphony and the Chamber Music Society of Lincoln Center. She earned her bachelor’s degree in music/business from DePauw University and her master’s in nonprofit administration from NYU. elizabeth.bernreuter@asu.edu

Director of Communications/Professor of Practice

As the communications director, Bordeleau oversees communications for the Cronkite School and Arizona PBS. As a professor of practice, Bordeleau team-teaches the master’s in investigative journalism bootcamp through the Howard Center for Investigative Journalism. Bordeleau is the retired executive editor/senior vice president of The Providence Journal and is the only woman in The Journal’s 191-year history to hold the top editor’s position. Under her leadership, The Journal won numerous state, regional and national reporting awards. The news organization was named a Pulitzer Prize finalist in Public Service in 2004, which Bordeleau co-edited.

In 2014, Bordeleau was honored with the Yankee Quill -- the highest individual journalism honor in New England – and in 2016, she was presented with the Judith Brown Spirit of Journalism Award, given annually to one woman who has made a significant impact on journalism in New England. Bordeleau is president of the board of directors of the New England First Amendment Coalition. She holds a bachelor’s degree in journalism from Northeastern University and a master’s degree in political science from the University of Rhode Island. She was a Sulzberger fellow at Columbia University in 2011.. kbordel1@asu.edu

Executive Director for Innovation and Strategy

Janet Coats leads training and oversight of the adjunct faculty and focuses on curriculum innovation and entrepreneurial efforts for the Cronkite School. She leads sponsored research initiatives and plays a key role in assessment, including leading the ACEJMC accreditation processes. She has oversight of the News Co/Lab, which works to advance digital literacy through journalism, education and technology. She also works with Carnegie-Knight News21, a national reporting initiative for journalism students headquartered at the Cronkite School. Janet came to Cronkite after 10 years running her own media consulting firm. Prior to that, she spent 25 years in newsrooms, including stints as executive editor for multimedia newsrooms in Sarasota and Tampa, FL. jecoats@asu.edu

Amber Back manages signature events for the Cronkite School and Arizona PBS, including the Walter Cronkite Award for Excellence in Journalism Luncheon, PBS KIDS Festival, convocation ceremonies and the weekly speaker series Must See Mondays. Prior to joining Cronkite, Back was at the ASU Foundation, where she served as events program manager, planning and executing donor engagement events. She also has worked for the Greater Phoenix Chamber of Commerce, Milwaukee Brewers and Phoenix Suns Charities. She holds a bachelor’s degree from ASU and a professional certification in events management. amber.back@asu.edu

Mary Cook is the director of Student Success at the Cronkite School. She manages course and classroom schedules and works on retention and recruitment programs. Cook joined the Cronkite School in 1987 as an academic adviser. She earned her bachelor’s degree in management and her master’s degree in higher and adult education from ASU. mary.cook@asu.edu

Director of the Cronkite Institute for High School Journalism

Anita Luera is the director of the Cronkite Institute for High School Journalism, a consortium of national and local programs designed to support and train high school journalism teachers and students. Luera was the first woman news director at a Phoenix television station, running the news department for Spanish-language Univision affiliate KTVW-Channel 33. She worked at KPNX, the NBC affiliate in Phoenix, and KOOL-TV, now Fox 10. She is a former president of the Arizona Latino Media Association. anita.luera@asu.edu 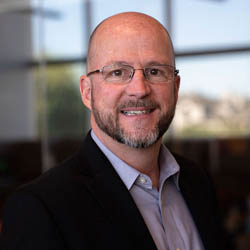 Ian MacSpadden joined the Cronkite School/Arizona PBS technology staff in 2015, and has served as director of broadcast engineering and operations since his arrival. As director, MacSpadden is responsible for the team that oversees all aspects of the school’s technical operations, including planning, design, installation and maintenance of innovative broadcast and IT systems. Previously, he was the lead for the technology teams that built YouTube’s and Meredith Corp’s New York City production facilities. He has spent more than 25 years working for local, national and international news and broadcast organizations such as ABC News, NBC Universal and Reuters. ian.mcspadden@asu.edu

Director of Fiscal and Business Operations

Sandy Mancilla Rannow is the school’s chief budget officer. Her responsibilities include administering the budget and business operations; directing personnel matters such as payroll, recruitment, selection and new hire actions; and preparing strategic financial analyses and projections. Rannow started her business management career in 1990 with Arizona State University and has worked in the College of Design and the Mary Lou Fulton Teachers College. She joined the Cronkite School in January 2013. smrannow@asu.edu

Vanessa Ruiz is the Emmy Award-winning director of the Borderlands bureau reporting team at Cronkite News. She also helps lead the Spanish-language newscast, Cronkite Noticias, works on special productions at Arizona PBS and is a Cronkite ambassador for diversity and inclusion. Before coming to Cronkite, Ruiz was the main evening news anchor for KPNX, the NBC affiliate station in Phoenix. Her career began with Telemundo Network’s national newscast, becoming Telemundo International’s youngest news anchor before transitioning into the English-speaking market at WSVN-FOX Miami. Ruiz has also worked for KNBC in Los Angeles and the U.S. Agency for Global Media for TV Marti. She has been recognized by the National Academy of Arts & Sciences and received the David Burke Distinguished Journalism Award. She is an active member of the National Association of Hispanic Journalists. vanessa.ruiz.2@asu.edu

TJ Sokol manages the Cronkite School Information Technology team, which handles the day-to-day technology needs of Cronkite faculty, staff and students. Prior to joining the Cronkite staff, he served as a technology support analyst at ASU Student Media from 1998-2005 and the ASU Biodesign Institute from 2005-2011. Sokol, a 1992 graduate of the Cronkite School, worked as a photojournalist in Vail, Colo., and Phoenix before beginning his career in information technology. tsokol@asu.edu

The Cronkite School’s long-time TV/Radio news director, Wong is now the school’s first full-time director of career services. He is the school’s chief liaison between students and the profession. As news director, Wong was responsible for the award-winning student-produced newscast ASU NewsWatch. He has coordinated television reporting workshops for the Voice of America-hosting journalists from Bosnia, Macedonia and Slovakia and has trained journalists in Kosovo. mike.wong@asu.edu

Samantha Incorvaia leads the Cronkite School's undergraduate student recruitment efforts. As a Cronkite School graduate, she aims to bring a positive and personable experience for prospective students and their families like the one she experienced as a student. She works to create and initiate plans to best support students through their journey to Cronkite, including their entire application process. Samantha earned her bachelor's degree in Journalism and Mass Communication from Arizona State University, and she worked as the Cronkite School's professional programs coordinator. She was also a journalist with The Arizona Republic. sincorva@asu.edu